THE FATHER OF MODERN TATTOOING

Lyle Tuttle, San Francisco’s most noted illustrated man, also referred as the father of modern tattooing was arguably one of the most legendary tattoo artists of modern times.

He passed away on the 25th of March 2019 after a career in tattooing that lasted 70 years. Which he celebrated last year with a lifetime retrospective.

His death has sparked countless tributes from the online tattoo community. He was hugely respected and he truly left an indelible mark in the society and this article it’s our tribute to Lyle.

I clearly remember when I saw Lyle Tuttle for the very first time, portrayed within a tattoo book in Amsterdam almost 30 year ago. I was so incredibly fascinate but his iconic bodysuit which he completed at a very young age around 1966. Most of his work has been done by another historical tattoo artists Bert Grimm. Just try to imagine what it meant carrying a full bodysuit over 50 years ago.

Lyle was born in Iowa 1931 and raised in California. This is how Lyle described his early fascination for tattoos:

“I was 10 years and two months old to the day, when the Japanese bombed Pearl Harbor.  All through the war servicemen returning home either on leave or maybe discharged from being wounded, many were sporting tattoos. To a kid my age, those tattoos were “hot shit”.  Those tattoos were living proof of a great adventure, with travel and romance combined. It meant that this guy had been out of the valley, over the horizon and places I had never heard of. WOW!

So that’s why tattoos have always been special to me. Tattoos are travel marks, stickers on your luggage. Tattoos are special, you have to go off  and earn them. You can go into a jewelry store and buy a big diamond and slip it on your finger and walk out. It’s not like that when you go into a tattoo shop and pick a big tattoo and pay for it. Now you got to sit down and take it.”

When Lyle was 14 in 1946, he felt an itch to ink his own skin. So one day he cut school, boarded a Greyhound bus from his hometown of Ukiah in Mendocino County to San Francisco and got his first piece — a heart with the word “Mother” – for $3.50.

He began tattooing 3 years later in 1949 and he worked at several parlors around Alaska and California, primarily under the tutelage of tattoo icon Bert Grimm. He eventually opened his own second-floor tattoo parlor in 1960 on Seventh Street in San Francisco, near the old Greyhound bus station. 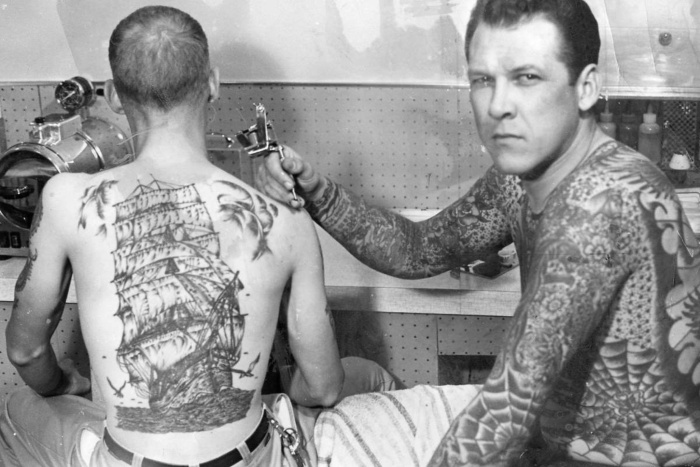 Lyle working on a backpiece in the late 60’s.

In the early 1960s, Tuttle spearheaded the movement to legitimatize tattoos.

Here we see Tuttle famously featured on the October 1970 cover of Rolling Stone, where he is photographed by Annie Leibovitz and interviewed by Dick Cavett. He would tattoo a who’s-who of 1970s pop artists, including Cher, the Allman Brothers, and a particularly famous heart on Janis Joplin’s breast. A 1973 New York Times article credited his work on Joplin with popularizing tattoos among women. 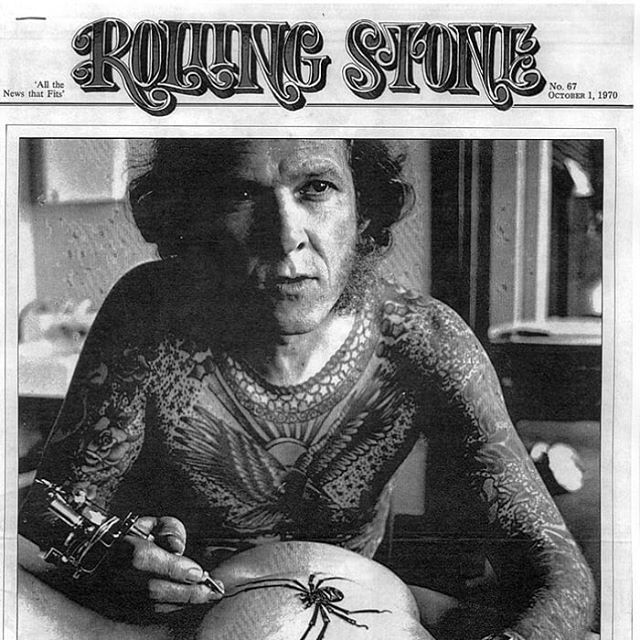 Joplin was known for being the first celebrity with a visible tattoo. She claimed that the symbol, to her, stood for the liberation of women. Tuttle told Prick Magazine in 2011 that women were responsible for the resurgence in tattooing. “One hundred percent women’s liberation! That put tattooing back on the map. With women getting a new found freedom, they could get tattooed if they so desired. It increased and opened the market by 50% of the population – half of the human race! For three years, I tattooed almost nothing but women…The women made tattooing a softer and kinder art form.”.

He frequently credited the women’s liberation movement for the tattoos’ golden age.

In 2014, Tuttle earned the distinction of becoming the first person to tattoo on all seven continents after tattooing historian Dr. Anna Felicity Friedman at the Russian Bellingshausen Station in Antartica.

“Because I was lucky to have the greatest time slot that any artist ever had in tattooing, it wound up that I had tattooed on six continents,” he said at the time. “So I had an opportunity to tattoo on seven continents. Well, I’m not out to break any records but why not do it? It’s there!”

Even though he mostly retired from putting his needle to skin in 1990, Tuttle continued to host an annual tattoo convention in St. Louis, and traveled as an educator and historian.

He also opened The Lyle Tuttle Tattoo & Museum in San Francisco. It features his own collection of tattoo memorabilia, in an effort to preserve the tattoo history for future generations.