The London Tattoo Convention, has been running for 15 consecutive editions between 2005 to 2019. This incredibly beloved show was organized by Miki Vialetto and Marcus Berriman (who unfortunately passed away in 2020) and has always been held at the iconic Tobacco Dock Venue. London it’s arguably considered the greatest tattoo convention on earth, attracting every year over 400 of the most respected Tattoo Artists on the planet. For many artists participating at the London Tattoo Convention has often been the culmination of their careers.

The latest poster of the 2020 edition (which didn’t take place because of the Covid Pandemic) has been designed by Andres Inkman,

This is the statement published by Miki Vialetto on the 15th of January 2021 announcing the end of the show:

So many things happen in a year. Including transformations, which to the eyes of time are nothing but tiny crumbs, miniscule millimeters moving on a time bar. But in our small and subjective universe, we change and move on. Often, this is not something we choose to do ourselves, but we simply submit to a series of events. How evident might this have been in 2020? How many of you changed your lifestyle and the daily routines you’d grown accustomed to? Not just practical habits but also in your relationships with other people or with yourselves, even.

For me, this past year – above and beyond everything else – witnessed the end of an important chapter: The London Tattoo Convention. A chapter in my life that deeply influenced me as a person, first and foremost, has ended. A period of 15 years helped me understand the world of tattooing even more, with all its dynamics and the people who animate it. Organizing the convention was a full-time job that completely absorbed me.

Each year, the curtain would rise on the most beautiful show of the year, with all the finest tattooists in the world who were just as excited as I was to bring all of this to life through a magnificent collaboration based on mutual respect, first and foremost. Tattooing and its contaminations have always been at the heart of my interests, and over 15 years the London Tattoo Convention never wavered and was supported 100% by the most widespread international community.

Miki Vialetto and Marcus Berriman at the London Tattoo Convention.

And then Covid blew in, bringing down all the highest towers of tattooing and leaving behind a blank slate. And this is where London ends. Its parabola has come to an end. Was this inevitable? Maybe so, due to the death of my business partner Marcus, first of all. He and I were a perfect team and continuing a project which we both started is an emotional burden too heavy for me to bear. Things change, geo-political situations change, people change, we all change. So now, for all of these reasons, I’m going to move on. I’m closing down this London Tattoo Convention, created with Marcus.

But I have decided not to close the book of conventions, because I believe that they are a fundamental part of our sector’s history, an opportunity to exchange and share that no social media could ever substitute. 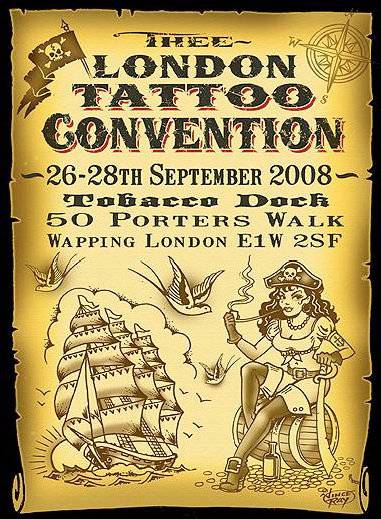